February has arrived with bright sunshine, high winds, and bitterly cold temperatures. The days are noticeably longer now (we've gained more than an hour of daylight since the solstice) and some of the earliest-blooming trees are beginning to show tiny new buds, despite the cold. The birds are busy all day at the feeders, and are very vocal this time of year. It's almost the beginning of their nesting season, after all.

The day before our coldest night yet, huge flocks of robins arrived in the area. We first started noticing them two days ago around our neighborhood and in our back yard. There must have been several hundred of them at least. Then yesterday GB and a friend of his went out hiking around the Pee Dee river (deep in the woods and swamps around the water) and they saw even more massive flocks of robins. He said they were everywhere, in the trees and on the river banks and flying around.  I know I've never seen so many at once around our house, and the river is 10 miles from here. Apparently thousands of them have moved south into the area to avoid the current cold front sweeping the east coast. Today most of them seem to be gone. My guess is they're moving on, further south where it's warmer. Smart birds!

Yesterday I discovered a sweet little clump of daffodils blooming in a slightly sheltered spot in our back yard. I've never been able to resist picking daffodils, so they had to come into the house with me! They're currently brightening up our kitchen windowsill: 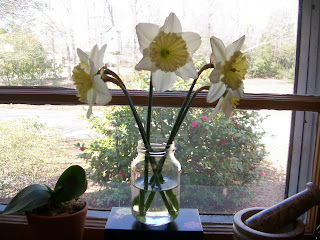 Even flowers probably appreciate a respite from the icy winds outside!