Tomorrow I'm hosting a small party for a group of my girlfriends. I used to be known for my strawberry daiquiris, so that will be the main alcoholic beverage. I do plan to make a large pitcher of white wine sangria as well, and I have the makings of several other drinks; Tom Collins, G&T, Cuba Libre, and there will be plain wine too. Also iced tea and sodas for non - alcoholic refreshment.

I've been working myself into a frenzy the past few days getting ready. Cleaning, shopping, and food prep have kept me busy. There are only five people coming; three are workmates who have never been to my house, two are old friends who have been over several times. I'm always nervous hosting these little get-togethers, especially when they involve new friends. I could (and probably should) have invited a few more people, but I felt overwhelmed enough with just the five. I love my little parties, but they always involve a lot of work and stress beforehand.

Being a social butterfly doesn't come easily to me!

Well, off to finish some more cleaning and prep before heading to work this afternoon. I'll post pre-party photos tomorrow.

Have a great weekend everyone!
Posted by Jennifer at 9:15 AM 8 comments:

A great day for equality in America! 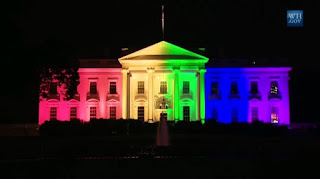 Marriage equality is finally the law of the land. I'm so proud of my country today.

June---the good and the bad.

This month has been a real mixed bag for me.

I rarely mention politics here on the  blog because there's rarely anything good to say and I get so worked up over things going on that I like to keep this place a kind of refuge from negativity. But I feel I must mention what happened in Charleston last week.

What a horrible, sickening, terrifying thing the murder of those nine people was. I can't understand that kind of racially motivated hate towards innocent people. And it's scary to live in a culture with an absolute gun fetish combined with so little respect for human life and dignity. This has been a year filled with racial tensions and I hope things don't continue to escalate. I don't want to see anyone else get hurt or killed and I dread the thought of more riots and mayhem.

One good thing that's come of all this is that it looks as if that damn flag is finally coming down from public property once and for all. It's way past time and a shame it's taken so long.

Closer to home, my poor Ginger has a cyst on her side that got infected and ruptured, leading to an emergency trip to the vet Monday morning. She has to take antibiotics for two weeks and then has to have surgery to remove the cyst after that. We're so worried about her even though she's going to be fine and this is all relatively minor stuff thank goodness. I hate for my animals to feel bad. I cried the whole way home after hearing she would need surgery! I'm so pathetic!

The best news so far in June was Gregg's yearly CT scan and quarterly check up with the oncologist showed him to be in excellent health! What a relief that always is....and now after 3 1/2 years he's being switched to only twice yearly check ups! I'm so very grateful for his continued good health....it really keeps all the bad things in perspective.


Last but not least, I was recently  invited to join a book club. Tomorrow is our second meeting, and I really enjoyed the first book we read and look forward to discussing it. We meet twice a month.

Oh, and it's hot as hell here. This summer has been setting records for high temperatures. It's miserable outside.

That's my June so far in a nutshell.
Posted by Jennifer at 6:10 PM 7 comments:

I had to take George to the veterinarian the day before yesterday, and when they weighed him, I was shocked. I knew he had bulked up some, but I didn't expect him to weigh 88 pounds! This further confirms that he's part yellow lab, since pit bulls don't get that big.

Have I mentioned how well he's been behaving these last few months? Mr. George is finally growing up a little and learning some manners! He's just a bit over 2 years old now, and is turning out to be a really sweet boy. And no matter how big he gets, Ginger takes no crap from him! She's still very much the queen bee and George respects that!

These are some of the things I love most about June. 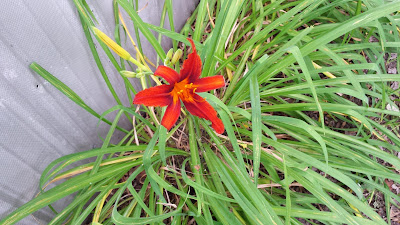 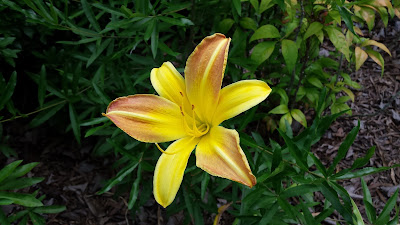 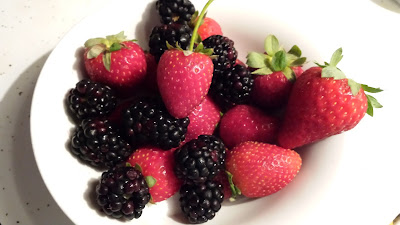 Summertime project for our dogs!

With record high temperatures forecast for the next several days (102°F to 104°F highs accompanied by high humidity) we've been worried about Ginger and George.

They're outside dogs due to my allergies, George's destructive tendencies, and our concern for our bird Marco's safety. They live in our garage, which has access to our main house entrance, the laundry room, and a large fenced yard so it's not like they're really outdoors....but the garage and laundry room are not air conditioned. (There is a large fan in front of their big doggie bed that runs 24/7 in the summer, though). Anyway, their quarters get pretty darn hot in the summertime and we've been looking for a cost effective way to keep them more comfortable.

Well, we found a project on Pinterest and YouTube for a homemade, low cost "air conditioner" and we decided to give it a try. Behold, the finished masterpiece currently cooling down the laundry room for our beloved pups! 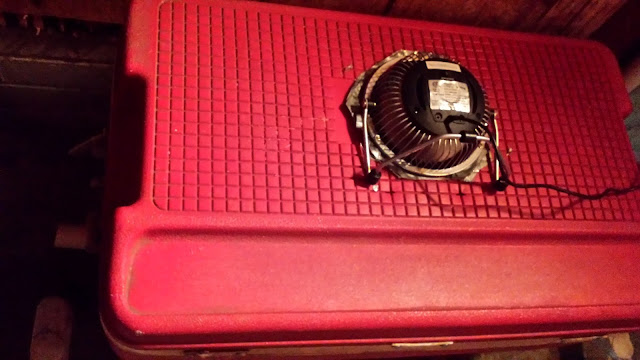 It's an old cooler we had stashed away in the garage. We used a Dremel to cut out a hole in the top just big enough to insert a tiny fan purchased at the dollar store for $4. Near the bottom we cut out a hole just big enough to insert a piece of PVC pipe for an air outlet. (You can see it on the left side, just not very well.) Inside the cooler we put 3 gallon jugs of frozen water. The fan on top pushes warm air in and around the ice, and then the air exits through the PVC in a cool stream.

There you have it...easy, energy efficient a/c for the dogs! We can re-freeze the jugs of water at night in our deep chest freezer. Besides the $4 we spent on the fan, and another $1 for a roll of duct tape (to seal the cut edges of the cooler before adding the fan and pipe) this didn't cost us anything as we used stuff we had around the house.

Now there's a small comfortable room for Ginger and George to retreat to during the hottest part of the day!
Posted by Jennifer at 3:18 PM 1 comment:

Today is my ninth wedding anniversary. I still say marrying Gregg was the best thing I've ever done.

My advice to anyone thinking about marriage is this: marry someone you can honestly call your best friend. You can't go wrong that way. A happy marriage is one of the most wonderful parts of life.

Here are a few pictures from Huntington Beach state park, where we spent our  honeymoon. We may take a day trip there in the next few days; we are taking a week off together to celebrate and it's one of our favorite places in the world. 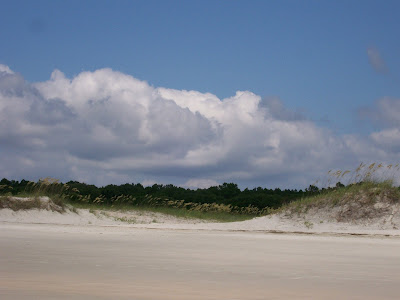 This is why I should never have kids...

.....but because I let him get a couple more sips of coffee while I ran to grab my phone so I could get a picture!
Posted by Jennifer at 3:05 PM 2 comments:

For Cro, a recipe!

Here is a picture of a very popular breakfast here in the Southern USA....biscuits and gravy! After posting yesterday about my craving for this delicious (yet decidedly NOT diet-friendly) dish, Cro let me know that he had never heard of it. So for Cro and my other friends around the world who have never heard of it, here is a link to a recipe from  The Pioneer Woman website:


She makes her biscuits with a food processor, which I've never seen done. My grandma (who made the best biscuits ever) always kneaded them by hand. But whatever works. If you've never had this dish, it's worth the trouble....so very delicious, and real Southern comfort food!