Two weeks ago I traded in my old car (a Toyota Corolla) for this. I love it! I didn't expect to buy a fire engine red car, but the salesman talked me into it. It was the only Scion he had on the lot, and someone had ordered some special features on it and then never followed through on buying it. He offered us the extras for free (fog lights, spoiler, clear coat paint protector thingamajigs, a better stereo) if we bought that particular one. For the first few days I felt terribly conspicuous driving such a red car, but then I got used to it, and now I kind of like it. The red seems cheerful and fun to me now!


The car we traded in was only two years old, and had just passed the 12,000 mile mark. Corollas get great gas mileage, and are very reliable, but the car was never very comfortable to sit in for long periods of time. It certainly wasn't made for things like road trips or going camping. We bought it when my husband was just finishing up chemotherapy, and at the time we weren't sure that things like camping trips would ever be possible again. We bought a car that made sense at the time, but now that life is back to normal, our needs have changed. Now a bit more space and cargo room is important to us. Especially since we've added a fourth member to our family this year!


The Scion will be perfect for hauling our two big dogs around in. The inside of it is surprisingly roomy, with ample space for legs and plenty of overhead clearance, even for tall people in the back seat. The small cargo area and the back seats will lay down flat when we want to take the dogs somewhere, and we've bought a canvas tarp to put down to save the seats from damage. The hatch and doors open close to the ground, just right for the mutts to climb in and out easily. Even with two dogs traveling with us, there will still be enough room for luggage and/or gear. The car isn't really all that big; it just seems like it because it's designed well. The gas mileage should be fairly good, and it has great reliability ratings. It's been much more comfortable to sit in than the old car (my back didn't like those seats at all) and I've had fun driving it. Best of all, now we can plan a family vacation!

We have had our George for six months now, and what a crazy six months it's been. I had no idea what I was getting myself into when I decided to add a second dog to our family. Especially a dog like him. There was, at the very least, a lot of neglect in his former life, and possibly some abuse. He was surrendered to the shelter where he lived for two months, a rural shelter in the next county that is seriously underfunded and staffed entirely by volunteers. He had to share a kennel with several other dogs, which had to be seriously stressful for him. He had also arrived at the shelter with some sort of nasty wound on his right side that was just starting to scar over. No one was ever clear on what, exactly, had happened to him. George weighed 41 pounds when we adopted him. The shelter staff said he was a "terrier mix" and around a year old. I took their word on the terrier thing and also figured he had mostly stopped growing (being a year old).

Turns out he was definitely younger than a year, and yes, he's a terrier mix....a Pit Bull Terrier mix! (That's one breed I never expected to own.) We think there's some Lab mixed in, too. And done growing? Hardly.

George had to go the vet last month, exactly six months after we had adopted him. He now weighs 65 pounds and isn't quite done yet. Just look at the difference:

So life with George has been an adventure, to say the least. A young pit  bull terrier/lab mix would be a challenge to raise under most circumstances, but George has been a whole other story. He came with a bunch of issues, some more worrisome than others. Add to that his natural extra high energy level, his bulldog stubbornness, his physical strength, and his over-the-top playful/destructive personality, and you have a recipe for trouble. It's been a challenge to say the least. I won't even mention all of our stuff he's destroyed while we're trying to teach him to be civilized. If I listed it all I'd have to go have a little cry and a lie-down. Trust me, it's a lot of stuff.


﻿
Yes, it's been worth it. Despite all his problems, and amid the wreckage that used to be our carport, laundry room, and backyard, George is beginning to display a very loving temperament. He has a big heart, and loves to be loved. Ginger tolerates him fairly well (they established her dominant position early on) and even seems to like him sometimes. All in all, I think that eventually, when the puppy wears off for good, he's going to be a great dog. I'm hoping so, anyway!
Posted by Jennifer at 5:08 PM 6 comments:

I got up this morning, poured myself a cup of coffee, and stood sipping it while looking out of the kitchen window. A spot of bright orange beside the driveway caught my eye, and it turned out to be a Tiger Lily! We've lived in this house for four summers now, but a few scattered daylilies are the only kind that ever bloomed here. Of course I ran and grabbed the camera. 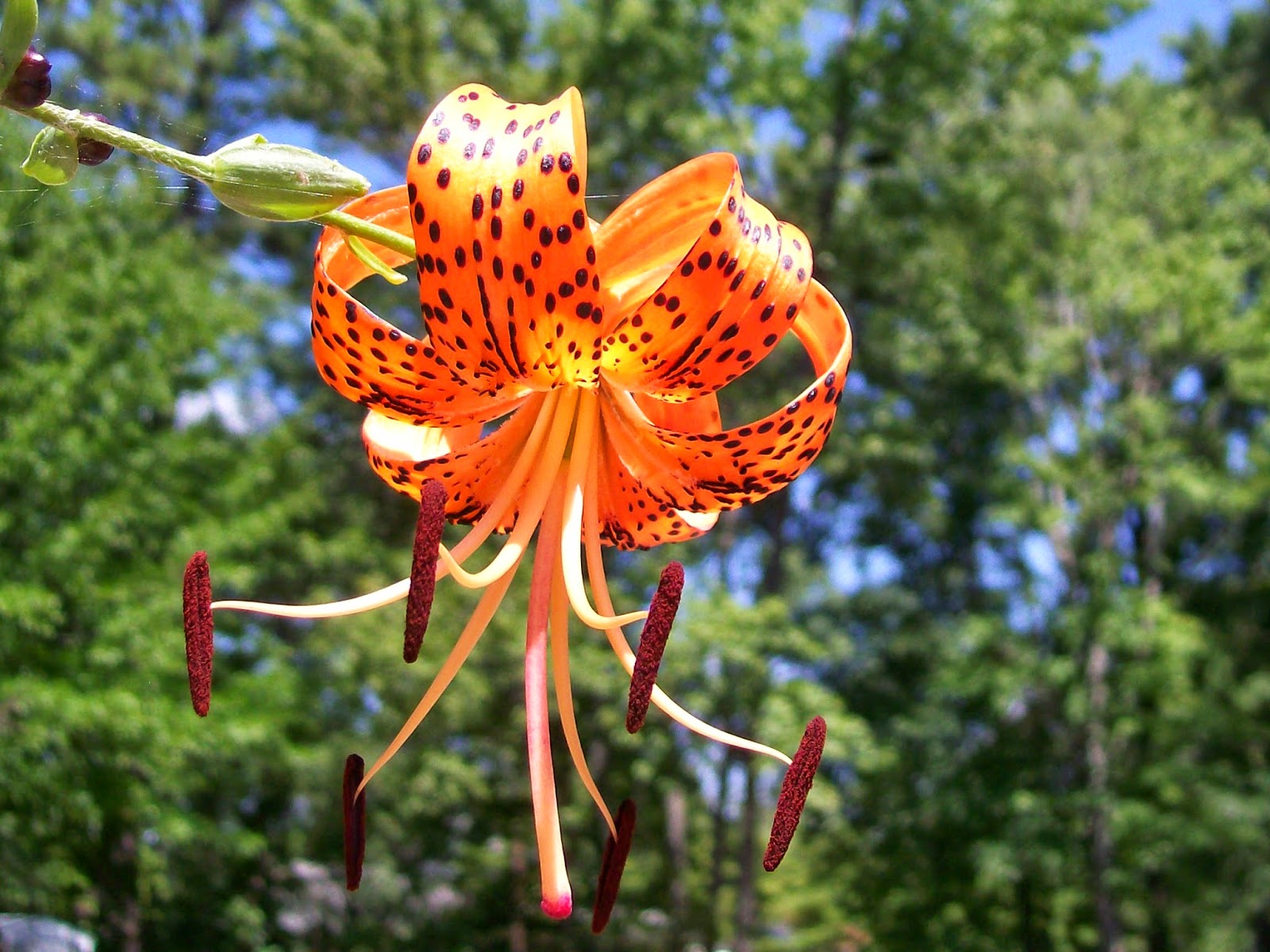 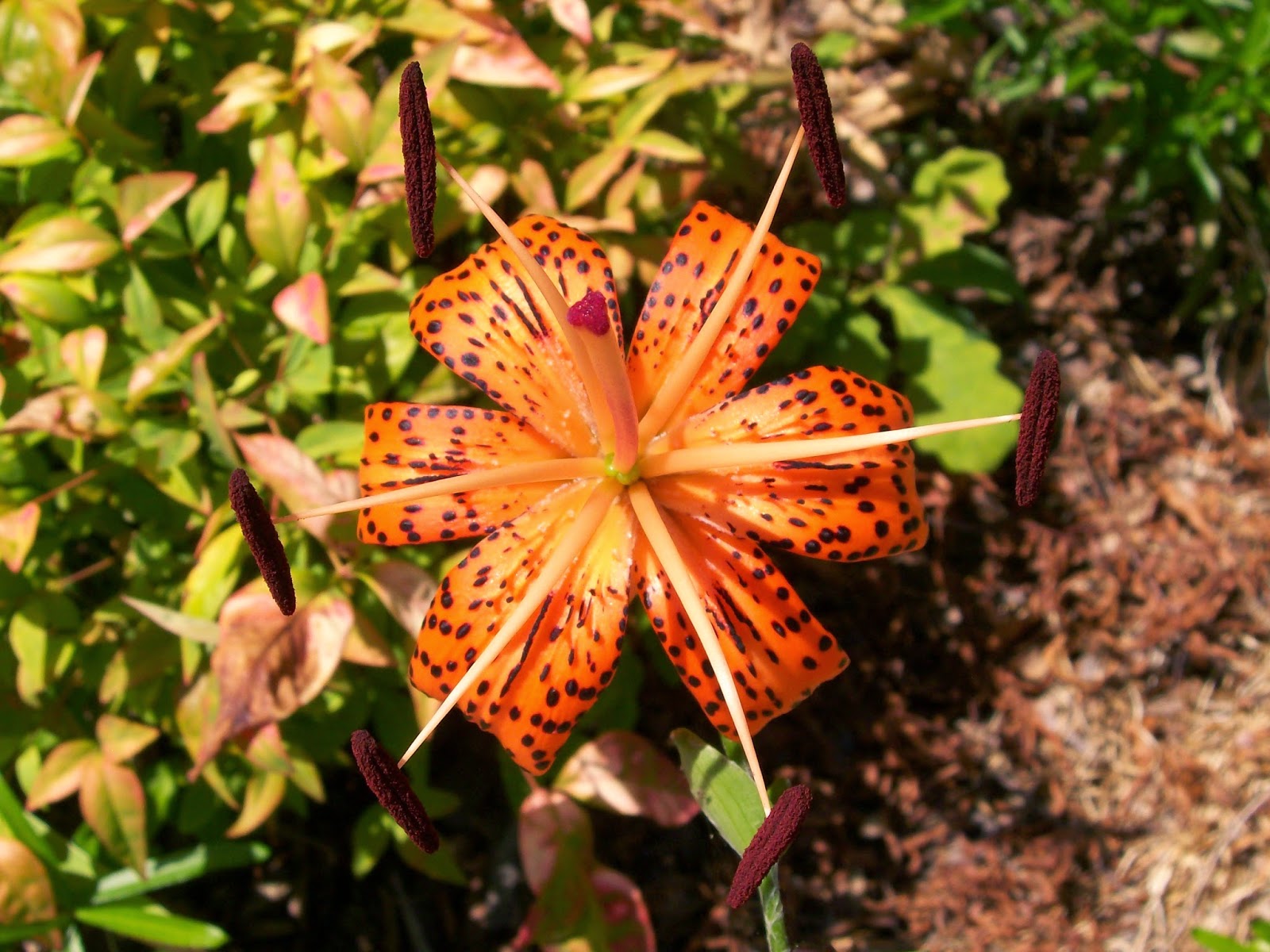 This is actually a Turk's Caps Lily (Lilium superbum) but one of it's common names is the American Tiger Lily. That's the name I grew up with. They are a species of true lily, native to eastern and central North America, and are only available on a limited basis in nurseries. My grandma grew them a long time ago, but you rarely seem to see them these days. They've always been a particular favorite of mine.

I thought that after four years, I'd seen all of the flowers left over from the days when a little old lady owned the house. What a happy surprise this was to wake up to! 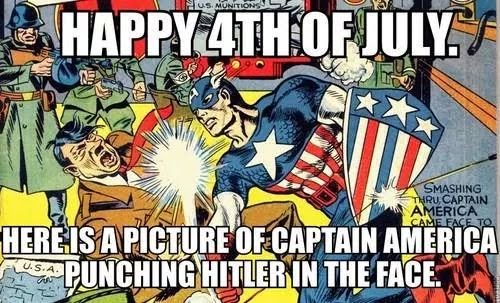 Although there are a lot of things about this country I would change if I could, it's still home and I love it. Happy Birthday USA!
Posted by Jennifer at 11:51 PM 1 comment: