Today is the autumn equinox. I couldn't let the day pass without a post to mark the occasion and the change in seasons. Here in South Carolina, the weather has cooled down quite a bit and the trees are just beginnning to change color. It is wonderful to go out for walks in the morning now that the heat and humidity are mostly gone!

It will be another month before our leaf color peaks, but the trees are getting small splashes of color. Red and yellow and orange leaves really pop against the still mostly green backgrounds. There are a few trees at our neighborhood park that are already dropping leaves. On a windy day earlier this week I tried to catch one as it fell. I have heard that the first falling leaf you catch is lucky, and should be kept for the duration of the season. I have not been able to get one yet. It is surprisingly difficult to catch a leaf as it flutters down to the ground. Try it sometime and you will see what I mean! 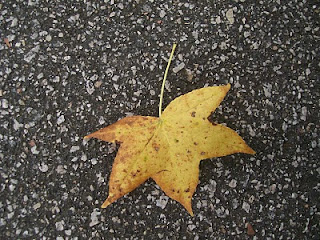 One sure sign of fall around here are the clumps of spider lilies popping up almost overnight in the yard. I love these weird little flowers! The latin name is Lycoris radiata, and these Japanese natives are perennials here in the south. All parts of the plant are poisonous. They really do resemble spiders with their long thin anthers. Here is a patch that comes back every year in our back yard. They are blooming right now. 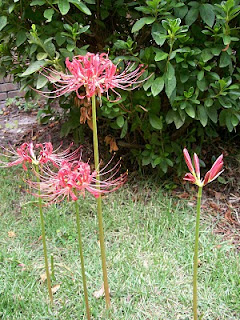 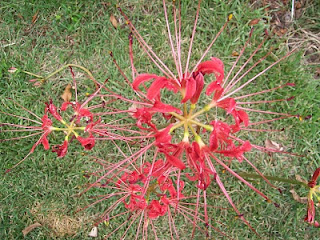 Today has been cool and rainy. I have spent the whole thing reading, napping, and drinking hot tea. It has been a perfect fall day!

Happy Autumn Equinox to all!
Posted by Jennifer at 4:11 PM 1 comment:

Just a quick post today to say how excited I am that I will be participating this year in the Countdown to Halloween Blog Party hosted by The Whimsical Cottage! 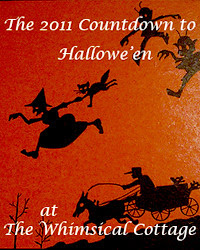 I will be kicking off the month by visiting a fall festival at our local farmer's market on October 1st. There will be lots of pictures, of course! Then I will be posting on all kinds of Halloween related crafts, decorations, and fun for the rest of the month. Stay tuned!!!
Posted by Jennifer at 11:14 AM 1 comment:

For years now I have wanted to celebrate the Chinese mid autumn moon festival, after first reading about it on Waverly Fitzgerald's wonderful site of seasonal holiday lore, School of the Seasons. It is considered a women's festival in China, and more of a family tradition in other parts of Asia, but the main theme throughout is that people gather outside during the full moon closest to the autumn equinox and stay up late enjoying themselves while gazing at the moon. In China, it is considered the start of the yin part of the year, when the dark hours exceed the light. Women traditional gather for "moon viewing parties" and stay up late moon gazing, drinking tea and wine, and eating fruits and sweets that symbolize the moon: melons, pears, peaches, grapes and pomegranates. It is also traditional to give gifts of "moon cakes" in beautifully decorated tins to guests. They are round cakes (round to symbolize the full moon) filled with sweet bean pastes and often, a boiled egg in the center. They are special treats and Asian people I have known sometimes refer to this as the "mooncake" festival.

There are many versions of the legend about the Chinese moon goddess, Chang-o, but the basic story goes that this goddess had stolen the elixer of life from her husband, who rules the sun, and they live separately across the heavens now. Often there is a tale that a rabbit lives in the moon with the goddess, and mixes the elixer of life with a mortar and pestle. So rabbits with a mortar and pestle are also symbols for this festival.

I am fortunate in that I have three very good friends that are as interested in other cultures as I am. I decided to plan a small party for us at this full moon, and they were all happy and excited to come. Here are some of the decorations and festivities that ocurred on Sunday night, under the full moon: 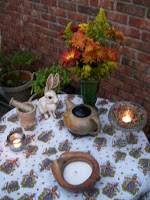 This was the moon altar I built outside on our patio. The party took place outside, of course. 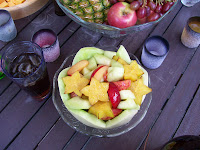 There were large platters of fruit. The fruit salad pictured above is held in a hollowed-out honeydew melon that I carved into a lotus shape. 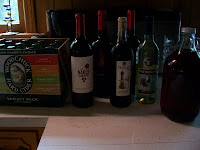 Although I told the ladies not to bring anything, all three brought bottles of wine. There was even a gallon jug of homemade muscadine wine given by one friend's grandparents. Obviously, we were not going to have any lack of alcohol!


I could not find authentic moon cakes in our town. That was a disappointment. One nice lady at our only asian market said that they used to carry them, but that no one ever bought them so they stopped. I didn't check until the last minute so I had no time to order any. This meant that I had to get creative.  I decided to go with the closest traditional sweet we have here in South Carolina. Check out my "down south" version: 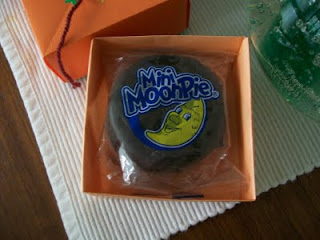 I packaged them in homemade origami boxes I made out of stiff origami paper. These made me laugh out loud when I put them together!  I tied them closed with string and sent them home with the ladies as they were leaving. I hope they got a kick out of them too!!

All four of us had a wonderful time. We laughed, we drank, we stayed outside past midnight. We gazed at the moon (it was beautiful!) and enjoyed each others company.  I hadn't laughed that much in months!  We have decided that this will be a new annual tradition for us.

Happy Mid Autumn Moon, everyone!
Posted by Jennifer at 10:57 AM 2 comments:

I am so happy that it is finally September! I am unusually excited about fall coming this year.

The temperature is starting to moderate. Although we have barely gotten any rain (there was almost none from the recent hurricane, which was a surprise)it is noticeably cooler, especially at night and in the morning. Exercise before work is much more enjoyable now. I am continuing to progress in my quest to abandon my coach potato ways. This morning I walked with 2 pound hand weights, and it felt good!

Ginger is also much happier on our walks these days since the weather is so nice. The air is cool, the skies are deep blue, and squirrels are everywhere in the park. We have also noticed flocks of doves searching in the newly fallen leaves for food. They are almost invisible against the brown dry leaves, then they burst skyward with a start when you happen upon them. There were three flocks of doves in the park this very morning, strolling around in the leaf litter under the big oaks, pines, and sweet gums. There are also pairs of woodpeckers living up in the tallest pines.I love hearing their ratatattat high above our heads! It's a nice park to walk through each day.

I am planning a celebration later this month to observe the Chinese mid autumn moon festival with some girlfriends the night of Sept. 11. We all have interest in Asian customs and holidays and so we've decided to take one of our "girls nights" to celebrate under the full moon. I will be posting pictures and links about the holiday and my little get together as I make plans for the next couple of weeks. I think it's going to be fun! I have always wanted to have a fall celebration of some sort at the autumnal equinox. This is finally my chance! More to follow on this!

Another thing I am happy about with the change in season is the foods that come along with it. The cafe attached to the bookstore where I work is beginning to bake Maple Walnut Scones, Pumpkin Bundt cake, Apple Cinnamon coffee cake and muffins,and is serving more hot chai tea already. It's hard to stick to a diet with all the wonderful smells wafting through the store. (How lucky am I that my workplace smells like new books, coffee, and baked yumminess?!) Yesterday I caved and treated myself to a slice of pumpkin cheesecake. It was sooooooo good! Who can resist such lovely fall treats all the time? Not me, especially while they're still novel. Soon it will be time to make some fall recipe goodness at home, too. I am looking forward most to homemade apple pie and spicy 3 bean chili.

I have also been browsing fall themed magazines and craft books at work. We are already getting in Halloween merchandise, which is the one holiday I don't mind living with for a long time! I love Halloween, and planning for it. Now that it's September, I can begin making plans without feeling too weird about it!

So, welcome September. Nice to see you again. Please linger as long as you like before making way for October!