After work tonight I went over to my friend Marian's house. She's in my book club and occasionally a few of us gather at her house to watch movies. Lately we've been watching Poldark. We all enjoy lusting after Aidan Turner.

Today I tried to share a video I took of all the pretty blooming flowers and trees in my neighborhood, and it wouldn't work. I was really disappointed.  So in lieu of that, I'll just show you a couple of pictures I took on my birthday this week.

First off, here is where I had lunch. This is a seafood restaurant close to my house that has great food. 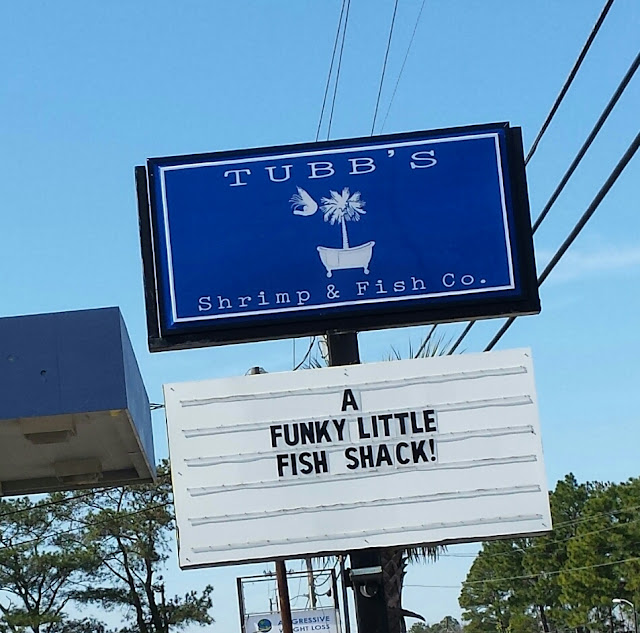 They make a wonderful, spicy version of my favorite meal--shrimp and grits. 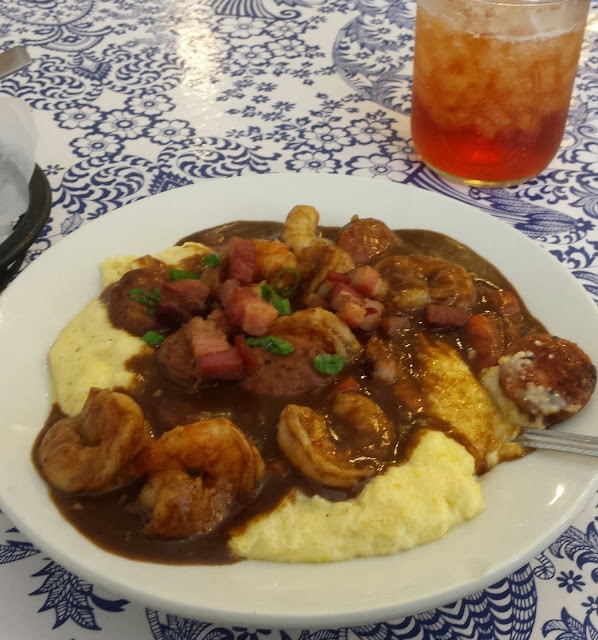 I did a bit of shopping after lunch. I wanted to find a new purse, but nothing appealed to me. I did end up splurging on a bottle of perfume..."Happy in Bloom".

Then I went and had my car washed and waxed and vacuumed out. It really needed it, and it's so nice to have a shiny car again!

I had a good birthday, despite the fact that Gregg had to work until late in the evening. We had just taken a week off together, so I couldn't complain. And once he got home we had a good dinner and a nice evening together.

Oh, and I took a birthday selfie! Just because. 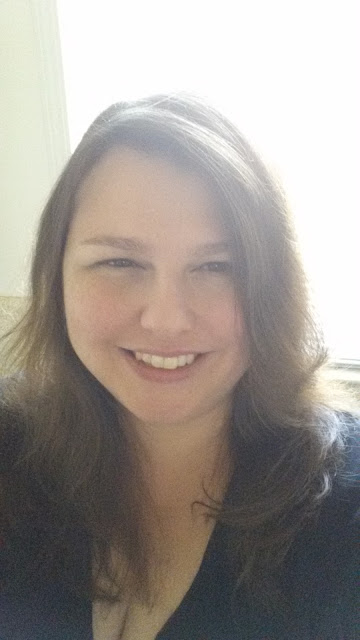 Thank you all for all the wonderful birthday greetings! They made me so happy!
Posted by Jennifer at 10:10 PM 15 comments:

The Colors of March

Ok, so I know how what I'm about to say is going to sound mean. And some of you who are parents might disagree with me wholeheartedly, but this is a pet peeve of mine and I feel like talking about it today. So here goes...

What is it with people who have kids and then all of a sudden (and for years afterward) the whole wide world is supposed to revolve around their precious little snowflake?  And they just expect everyone to be as enamored of their offspring as they are, and to overlook any inconvenience they cause. I like kids, I really do, but I also have the old fashioned (and very much out of vogue) opinion that there should be some limits on how much children should be seen and heard when out in society.
I don't like having children and their behavior forced on me in certain situations.

Here's a recent example. Last week an old friend of mine and Marla's was in the area. She moved several states away a few years ago but occasionally visits her in-laws who still live in South Carolina. The three of us hadn't seen each other for two years. We made plans to meet her in a town halfway between us and her in-law's house to have lunch, and I also suggested that after we caught up at lunch we ought to go visit a museum or something, and just spend the afternoon together. Well.

She showed up with her husband and two small children.

I couldn't believe it. There was no reason whatsoever to bring them. The kids (aged 2 and 5) were rowdy, and had to be minded the whole time. There were stinky diapers to be changed (dad refused to take the toddler boy to the mens room to change him so our friend had to go) and messy finger food with ketchup ending up everywhere, and a kindergartener yelling "BUTTCRACK!" about 5 dozen times because it's her new favorite word, and a couple of mini tantrums to quiet....etc etc....you get the idea.

Not only was an adult conversation between the three of us impossible, what with the crazy kids and the husband sitting nearby, but I'm not sure our friend would have talked about anything but her kids even if she had come alone. It's like there's nothing else at all going on in her life. She's a stay at home mom, and I get that she doesn't have a job, but you'd think she would have a hobby or two outside of her children. But nope. Everything, and I do mean everything, is about them. I feel certain that she actually thought we'd want to see her kids. And while I have nothing against them, or her husband, Marla and I wanted to see her. Not her family. And we certainly didn't want to watch her struggle to keep everyone fed and clean and occupied for an hour. Because that's all the visit lasted--just long enough for lunch. We left immediately afterwards, having had enough.

I should also add that I thought it was a bit insensitive of our friend, bringing her little children and making them the center of attention when Marla just lost her baby 6 weeks ago. I'm sure it never occurred to her that it might touch a sore spot, but it should have.

Our friend is a good person, and I understand she's trying her best to be a great mom. But she's not doing her children any favors by treating them like the most special wonderful beings that ever walked the planet! And I see that same behavior everywhere--social events where kids shouldn't even be to begin with and public places where the kids are allowed to act out and disturb others. When I was the age of my friend's daughter (almost 6) I would not have expected to go to lunch with my mom and her friends to begin with, and if I had, I would have known to sit quietly and not make a spectacle of myself. By today's standards, my mom was fairly harsh with me and was quick to correct me, but I think I turned out better for it in the long run.

So, friends with kids can be a real drag. That's my Monday afternoon rant!

Marco just got busted for the third time raiding the leftover cupcakes from my Wednesday night book club meeting.


He seems partial to the lemon ones.

Email ThisBlogThis!Share to TwitterShare to FacebookShare to Pinterest
Labels: life with parrots, Marco

During the three days we were away on our camping trip, Spring burst into life on our street. Three days of warm sunshine and one good drenching rain made everything pop. 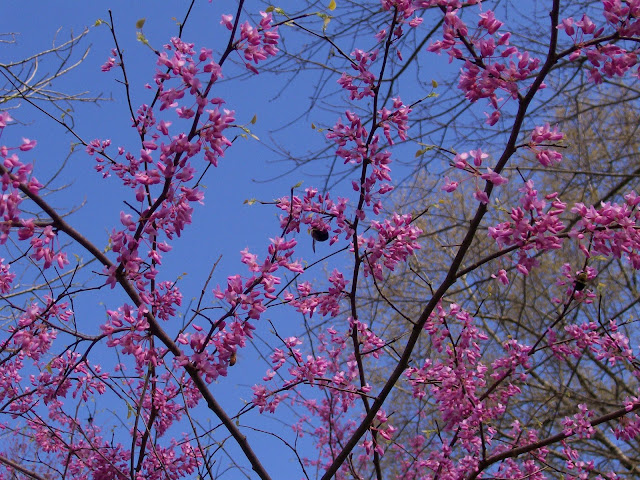 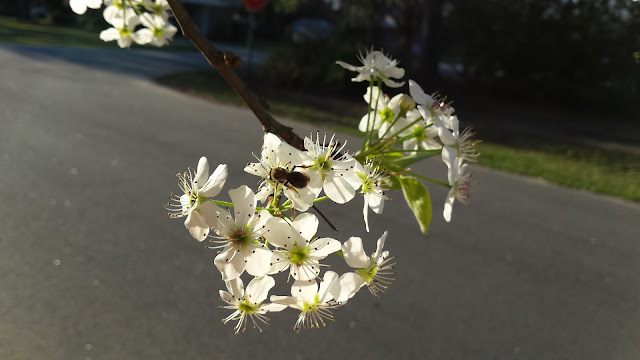 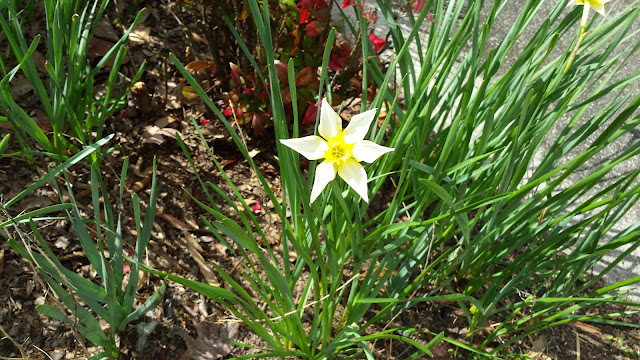 All three photos were taken in my yard. I love this time of year!
Posted by Jennifer at 12:54 PM 10 comments:

Back from the wilderness

We went on a three day camping trip down at Lynches River.  Our new tent was awesome and kept us dry and comfortable during an unexpected downpour and thunderstorm on the last night.

Ginger and George did great! They're really good campers. In fact, they both insisted on sleeping on the air mattress with me, and poor Gregg got stuck sleeping on the floor. They refused to budge! But they DID keep me nice and warm, and Gregg was a good sport about it. 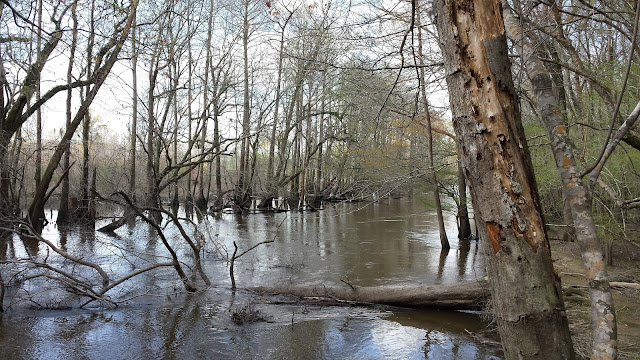 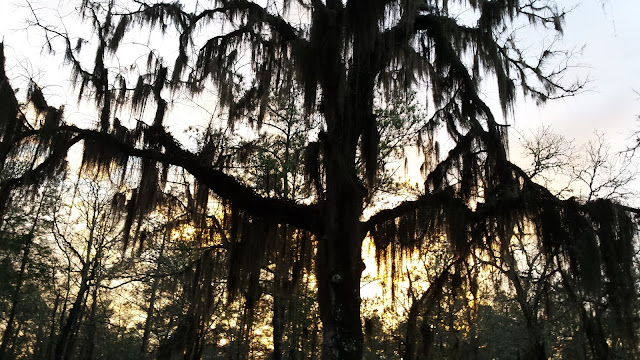 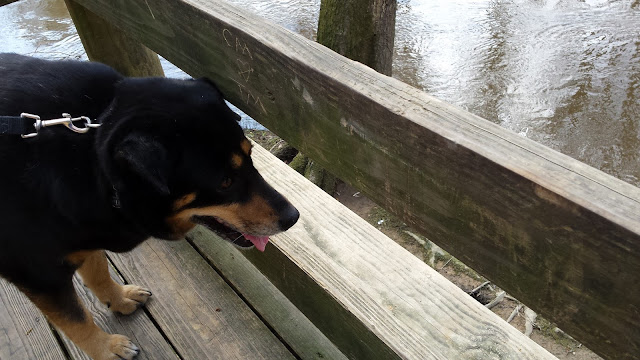 From insecure and badly behaved shelter castaway to goofy and sweet member of the family, George's transformation over the past two years has been dramatic.

Lynches River Park is where Gregg and I will be camping for a couple of nights next weekend. Early this week we went to have a look around and see if the campsites were dry. I snapped a couple of photos while we were there, nothing very good, but I did get one of a sign posted at the entrance to the river platform trail that may be of interest to Mr Yorkshire Pudding. I took these just for him. 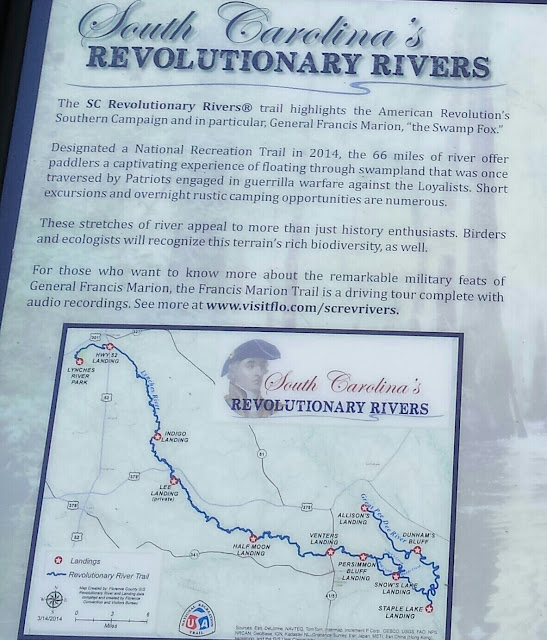 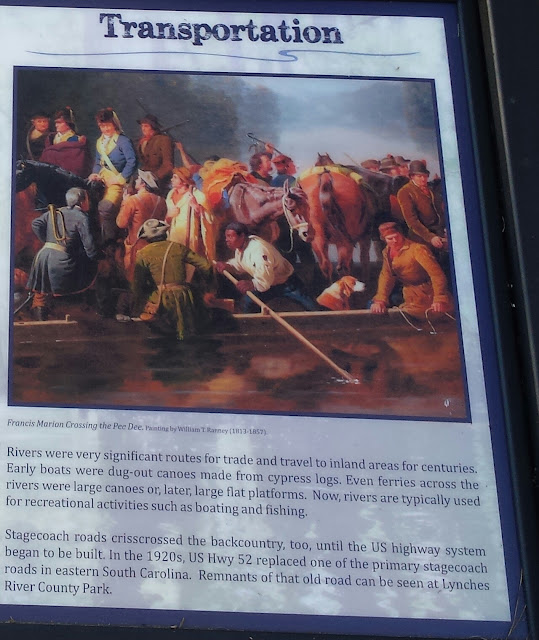 I love following YP's  walks around his home in the English countryside. The places he gets to visit are astonishing to me because of their antiquity. There's so much history for him to share, and it's always a real treat when he blogs about the places he visits.

This part of South Carolina where I live was heavily involved in the Revolutionary War. The rivers were an important part of the war, as well as the rest of our relatively short history as a state. Rivers provided a means of transport and travel in our very earliest days.

When the first British colonists settled here, what a different world it must have seemed. A New World in every sense of the word, with only a few small and scattered tribes of Native Americans inhabiting this vast land. I can hardly imagine how huge and wild and bursting with possibility it must have seemed.

Here are a few photos I took the other day at Lynches River.  Please forgive the quality; I took these with my phone. When we go camping I'll dig out my camera to take so I can get some better ones. 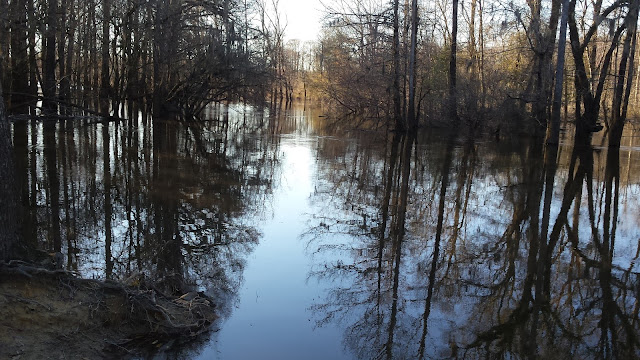 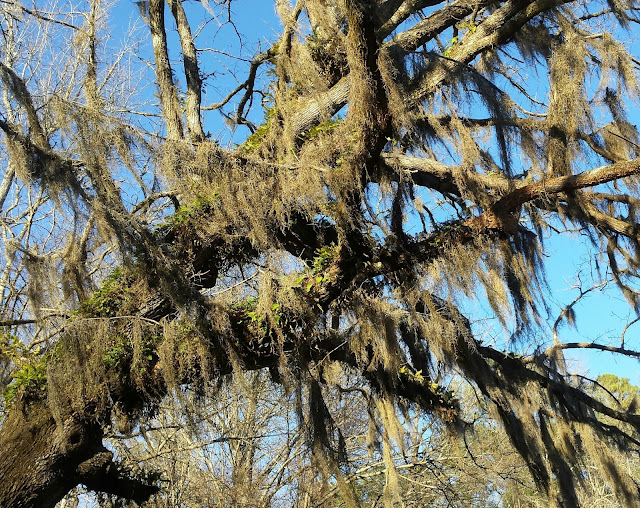 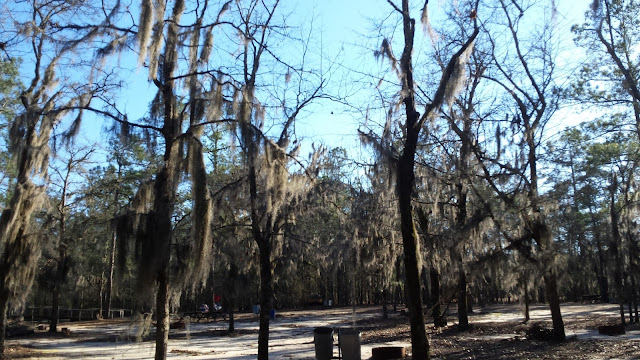 The last photo is my favorite. This looks like home to me. I grew up not far from here in a town close to the Pee Dee river, and only about 40 miles from the beaches. The flat land, sandy soil, pine trees, and Spanish moss are typical of the place I'm from.
Posted by Jennifer at 1:24 PM 7 comments:

I'm exactly one week away from a vacation.  I'll be taking 10 days off (!!!) and Gregg is taking a week off, too. We just bought a new tent, and we're planning to spend a few nights camping at Lynches River Park with the dogs. After that, my friend Meg will be visiting from Texas. I'm so excited to see her! It's been a couple of years since she was here last.
She's coming to spend some time with me and Marla, since we're all old friends. Then I may even try to squeeze in a short trip to Aiken, SC to visit my grandmother.

It's going to be great! Gregg and I are both looking forward to the time off.

But in the meantime....I'm sick. I've come down with a cold that I fear may be turning into a sinus infection. I have a terrible headache behind my eyes, and I'm sneezing and wheezing and my nose is running like a faucet. I ache and I'm irritable--a sure sign that I'm sick.  And the LAST thing I want to do is give this funk to Gregg! He's extra sensitive to respiratory infections and takes forever to get well once he catches something. So.....

I'm staying far, far away from him! No hugs, definitely no kisses, and my own bedroom to sleep in. I'm washing my hands constantly and being careful about sneezes and coughs.

I told him to just consider me Typhoid Mary for the time being!
Posted by Jennifer at 11:30 PM 15 comments:

These tiny little weed flowers are blooming underneath one of the walnut trees in our backyard.

I took this photo of George today, and Gregg said it made him look simple-minded. 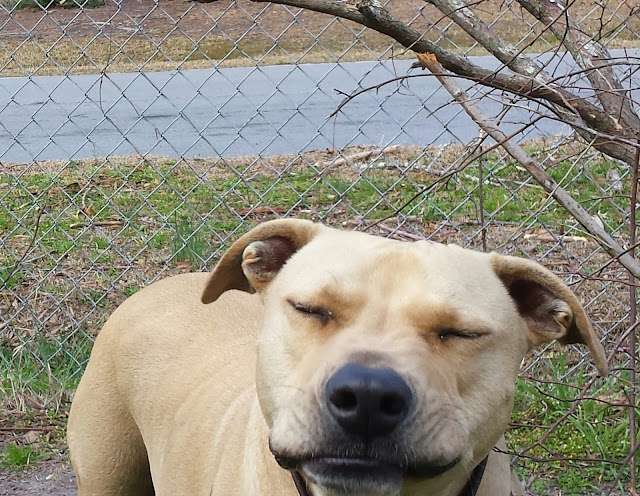 I shared the photo and Gregg's reaction to it on Facebook, and one of the guys I work with added this photo *  in response: 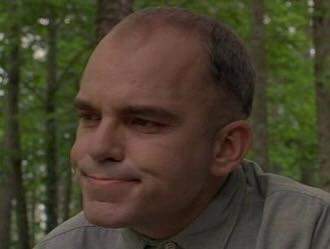 That made me laugh really, really hard!

* For those who don't get the reference, this was Billy Bob Thornton' s mentally challenged character in the movie "Slingblade".
Posted by Jennifer at 11:50 PM 8 comments: