Seven years ago today my pal Marla and I decided to go spend the day at Huntington Beach State Park, in Murrells Inlet, SC. It turned out to be an unforgettable experience. And by "unforgettable" I mean "slightly traumatic".  It was definitely one of our most memorable adventures so far! When I shared pictures from the trip on my blog a couple of days later, I didn't mention the ordeal we had endured. Instead, I concentrated on sharing pictures I took that day, and I'll be sharing a few of them again as I tell the story.

The day started off beautifully.

Huntington Beach State Park is about a 90 minute drive from our home in Florence. We started out early in the morning, with a cooler full of ice water, hats and sunscreen, and a full tank of gas. The plan was to spend a few hours hanging out on the beach and exploring the marsh, and then maybe having a nice late lunch somewhere before heading home.

Although there are lots of great things to do in and around the park, the uncrowded beaches are truly wonderful. 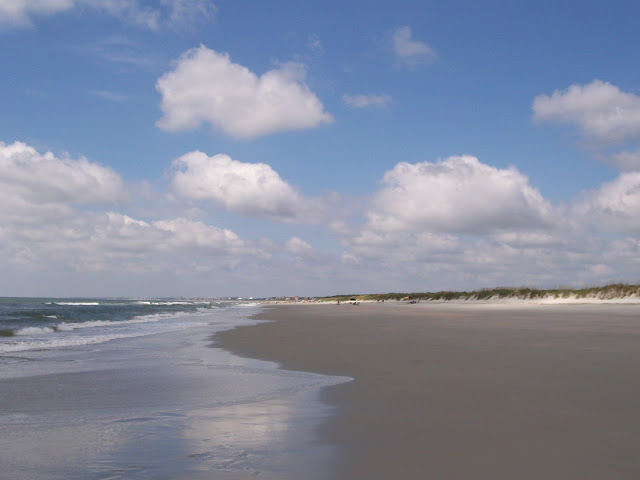 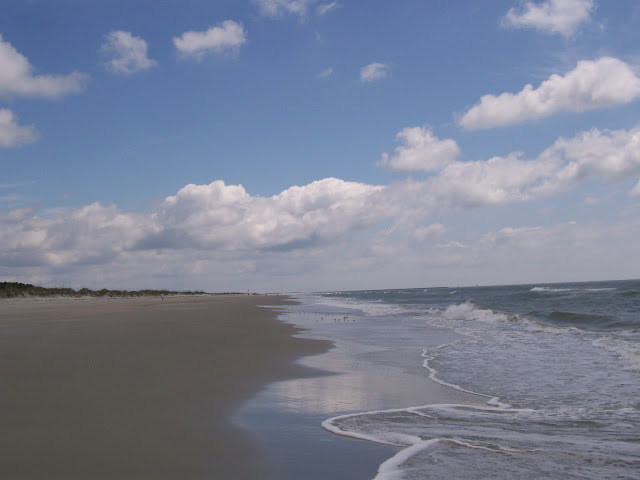 As soon as we arrived and parked the car, we decided to walk on the beach for a few minutes. We struck out in the direction of the jetty, after only pausing long enough to slap on some sunscreen. We left our cooler full of drinks in the car, as we only intended to walk a little way at first. That was our first mistake.

And so we walked. And walked. The ocean felt wonderful on our bare feet and legs. 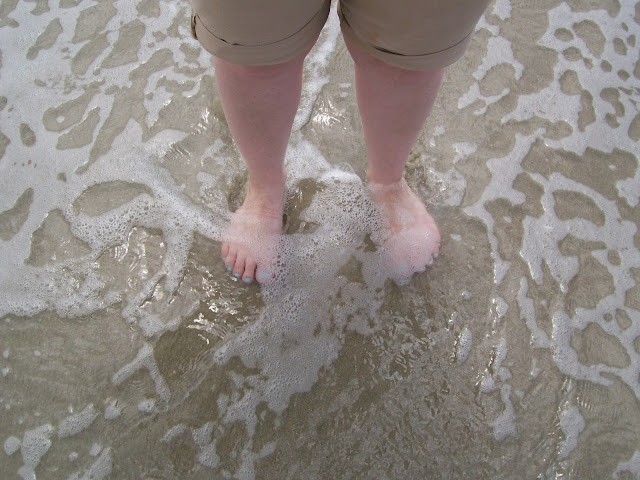 We even met a few new friends along the way.

We found a couple of souvenirs to take home, too. (We had brought a small bucket along to collect treasures, but not any water to drink or extra sunscreen. Priorities!) 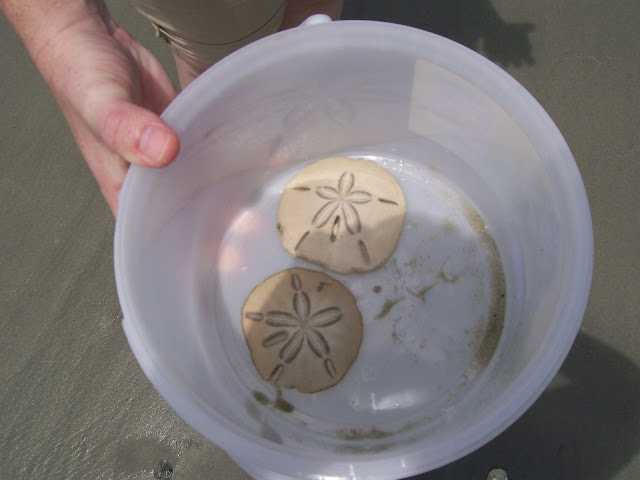 So we kept walking.... and walking.... and walking. I have no explanation for that. The jetty didn't look all that far away, but after an hour or so Marla said, "Jennifer....does it look like the jetty just isn't getting any closer?" and I had to agree with her that it looked about the same as when we had started. We should have stopped right there and taken stock. It was blazing hot, the sun was beating down on us, and we were beginning to get thirsty. Maybe the sun was starting to go to our heads because we agreed that the jetty couldn't be that much further away and since we had already come so far, why not keep going? You guys.....that was our second mistake.

So we walked some more. 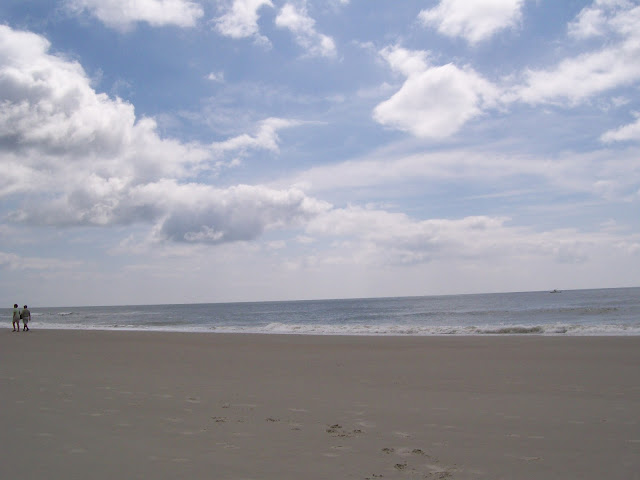 Finally, finally, the jetty really was closer. We had made it! Yay! 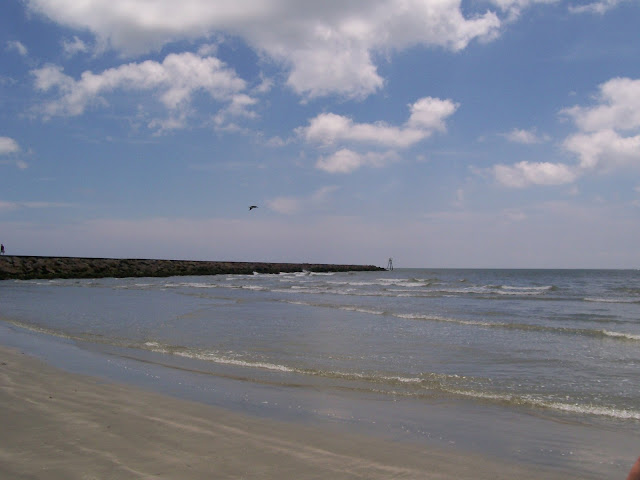 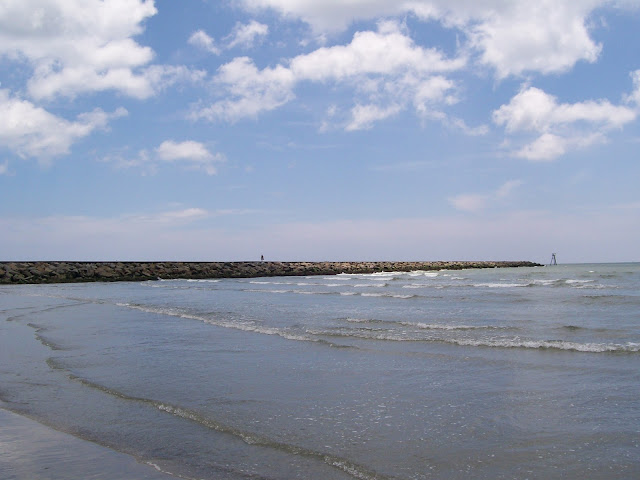 Even though we were already tired and disheartened at how long it had taken us to get there, we decided we had to walk out on the jetty before turning back. Here's a photo I took looking back towards the shore: 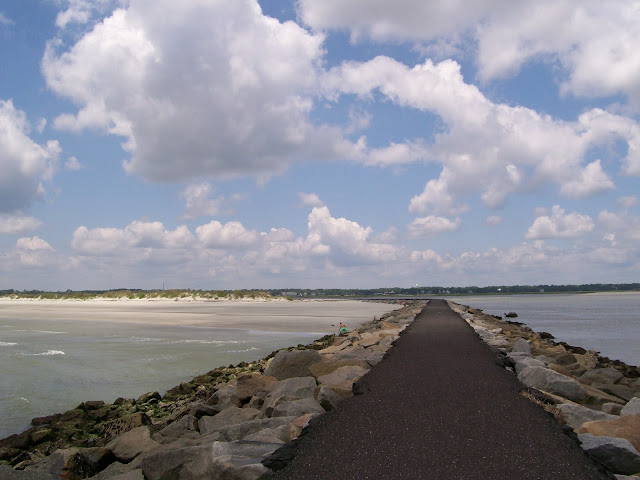 The more astute of my readers will guess what happened next. Yes, our dumb asses finally realized we had to walk that whole way back!

It had been hours at this point. We were hot, tired, and very thirsty. Our sunscreen had long since worn off and we were starting to burn. And the walk back seemed like a herculean undertaking.

So then we had our final bright idea of the day. We decided to head to the dunes and try to walk back to the park base via the nature trails that wind through the maritime forest. Actually, we didn't realize that they "wind through" the maritime forest. I think we assumed they mostly ran parallel to the beach, and our line of reasoning went that at least we'd have some shade and protection from the sun going that way. This was a BIG MISTAKE. 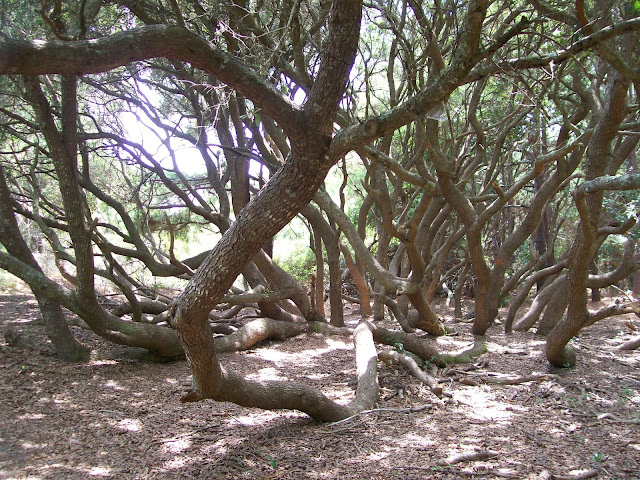 First of all, it was hotter back there even though there was shade. Most of the paths winding through the trees were open and sunny. Sand started to get into our sandals and blisters started to rise on the bottoms of our feet from the friction of the salt water and hot sand. We were dehydrated, so dehydrated at that point that we had to keep stopping from flat-out exhaustion. Then we got lost. Yes, lost! Marla finally resorted to trying to pull up GPS on her phone to try and figure out just where in the park we were, to no avail. It would have been funny at that moment if it hadn't felt so deadly serious!

At one point, and I'll never forget this as long as I live, we were sitting, dejected, beneath a tree just beside the path and wondering how in the world to get out of the fix we had put ourselves in, and Marla looked at me and deadpanned: 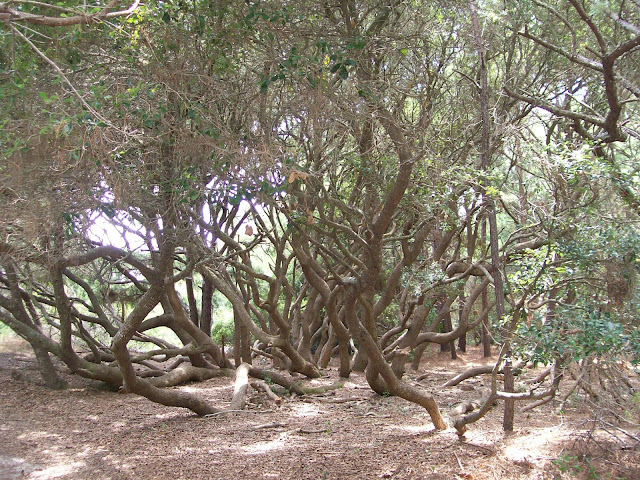 Eventually, sweaty, exhausted, sunburnt, nauseous, and limping, we burst through the back of the tent camping area of the park. Several families looked at us with alarm as we marched through their camps. We didn't give a damn at that point. We were way beyond caring. I can only imagine what we looked like....a couple of crazy women is my best guess! I can only speak for myself, but I'll tell you how I felt: utterly desperate. When a park ranger zoomed past us on a 4 wheel drive I hated him for not somehow noticing our plight and offering us a ride. (Which was of course completely irrational). We still had a good half mile to trudge back to the parking lot.

Of course, we finally made it back to the car, and got something to drink, and headed home. It was such a relief to drive out past the salt marshes on the way to highway 17. 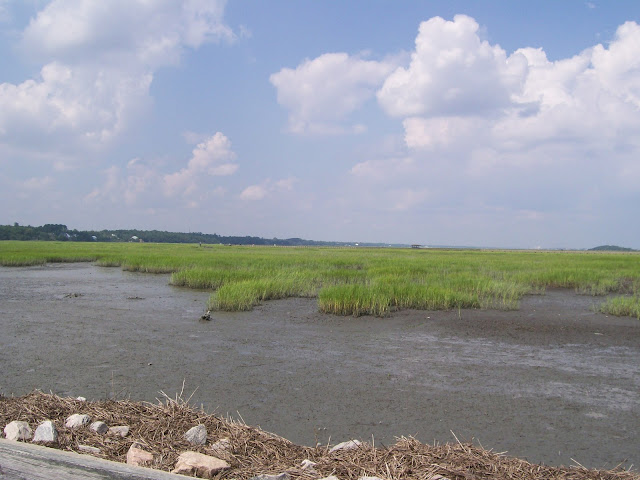 We've laughed about our adventure for years now. We left the park that day horribly sunburned, with large blisters on our feet and sore, sore muscles everywhere else, but it's made for a good story to tell: The Day We Almost Died in a State Park!

***As we drove home that day we heard that Prince George had just been born in England. I'll never think about that boy without remembering what I was doing when he was born!***