I love the month of October! Now it really, really feels like fall here in the Carolinas. Trees are sporting real autumn colors. The annual pumpkin sale at the church down the road has commenced. Our nightly walks with Ginger now require a light jacket or hoodie. And best of all, Halloween is on the way!

Several of our neighbors have already decorated their houses and yards for Halloween (or, in the case of older, more staid and/or religious folks, Autumn). I am excited to report that there are several new young families in our neighborhood, and this should mean a good turn out for trick or treating! I've got some special crafty treats planned for handing out, as well as ideas for jack o lanterns and other front step adornments to delight the kiddos. Here are some pictures from previous holidays (I'll be using some of the same decorations this year). 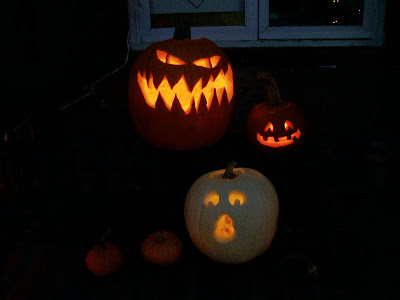 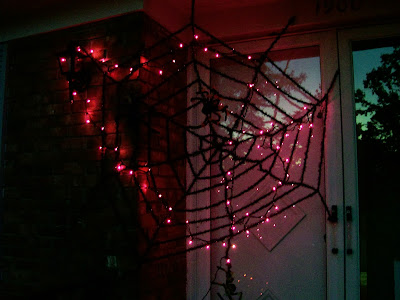 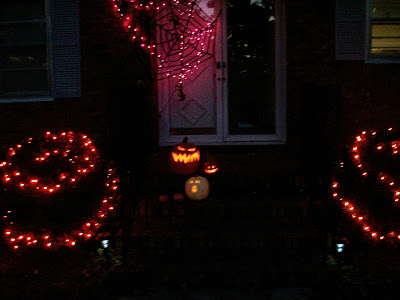 In other news as October opens, the dog I went to see at the shelter was no longer available when I got there. He's going to a rescue up in Washington, DC where a nice foster home is waiting for him. He was chosen for the program the day before I went to see him, so it just wasn't meant to be, I suppose. We're still deciding whether a second dog is a good idea anyway, so it's just as well for now.

The job search has stalled. It's going nowhere. I've looked hard for two months, and only one job has even been worth applying for. I had hoped to be giving notice by the beginning of October, but that is not meant to be either. I'll be taking a week off later this month with vacation days I'd been saving up to use for job interviews. A week off at the end of the month will be glorious...and not a bad consolation prize for the lack of interviews I had hoped to be having. And it will give me some time to do last minute crafty stuff for Halloween, too!