Even though I've barely left the house this week, things have been....interesting....around here.

It's been a banner week for birdwatching. About three days ago a Facebook friend posted about a rare sighting of a Rose Breasted Grosbeak at one of his feeders here in Florence. I told my husband about it that afternoon while we were sitting on the porch watching our feeders, and not an hour later one showed up! This was a first for me. 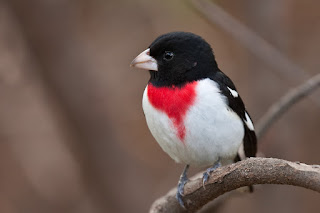 And if that wasn't exciting enough, we had another feathered visitor a few minutes later that was even rarer in this part of the state: a Painted Bunting! 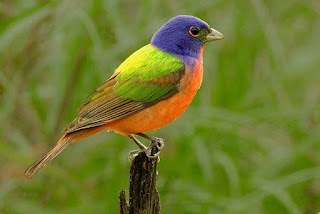 Unfortunately, the Rose Breasted Grosbeak and the Painted Bunting only hung out at our feeders for a few minutes, and then they both disappeared. We sat outside all afternoon yesterday hoping they might stop back by, but no luck. They must have been passing through on Monday and it was just sheer luck that we were sitting outside and got to see them. 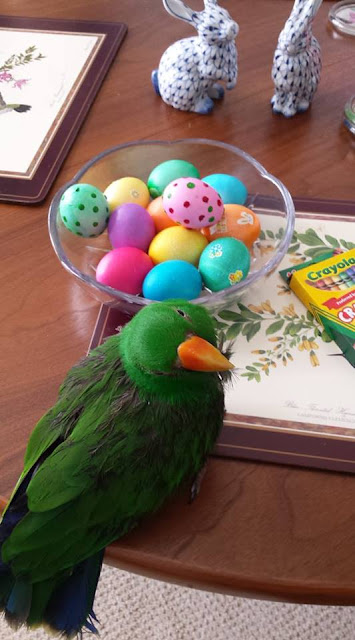 Somebody kept trying to sneak up on the dyed eggs to see what they were all about! I had to stop him twice or he would have broken into them. I finally just took them away. Brat!

I also got a much-needed haircut: 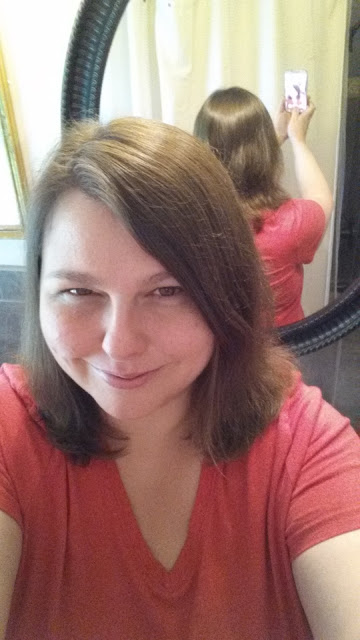 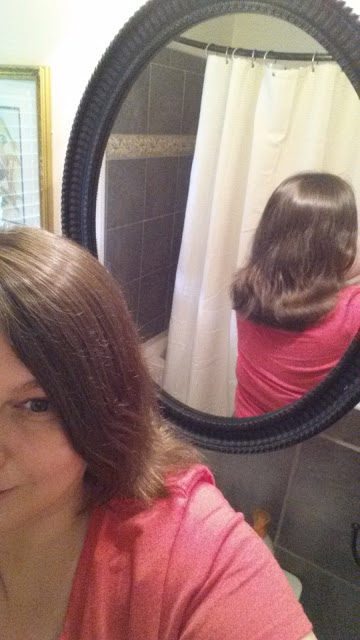 In January and February I started losing an alarming amount of hair. Every time I took a shower there would be gobs of hair around the mesh drain covering. Of course I googled it (thanks Doctor Google!) and discovered that stress can make that happen. Apparently you're supposed to think back two or three months before the hair loss started to see what was going on in your life. Well, we bought a house and moved in November. So there you go. I'm beyond thankful that the loss seems to have gone back to a normal amount, even though now I have tons of 1-2 inch new hairs that stick out all over. Hey, at least it's growing back, right?! I hadn't had a haircut in several months and my hair was looking bad. Limp and tired, thin, with dead ends. I usually go to our local Great Clips to get my hair cut, but that's always a crapshoot. I've had some of the best and some of the worst cuts of my life there. I went yesterday hoping to get someone good, and as luck would have it a woman named Wendy who has hair very similar to mine in texture and color was assigned to me. She listened sympathetically to my tale of hair woe, assured me that she's seen lots of people lose a bunch of hair when they're stress and that it always grows back, and then talked to me about  the best method of cutting fine hair like mine. I was very, very pleased with the results. The cut is good (hard to see that in these two pictures) and now my hair looks much healthier and shinier again. Wendy was a godsend! I feel so much better about how I look right now.

Finally.....the weirdest thing that happened this week. I've been looking at the fence line in our back yard, planning how we need to get back there and do some weeding. On Tuesday afternoon I went out there again while scooping up dog poop and this had appeared, hidden in the bushes just behind the crazy old man neighbor's property line: 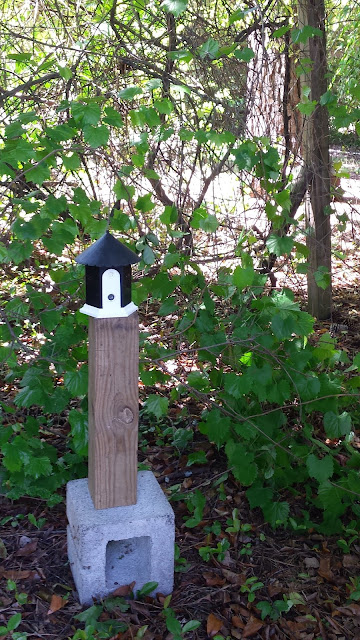 What does that look like to you? The crazy old asshole has set up a surveillance camera! It's pointed at our back yard and porch, although when you're sitting on the porch the angle of our garage blocks it from view. It's hidden in thick bushes about 6 inches behind his property line, and it definitely wasn't there the day before. There is absolutely NOTHING on his own property that he could be filming. Not his yard, not an entrance, nothing at all except our yard and house. What a creep!

I texted the sheriff's deputy that works at our school. He said he didn't think anything could legally be done, since the camera is outside and on his property. He said he would put up something to block the view of the camera, and see if it moved. He thought it was hilarious. I was furious at first, but now I think it's kinda funny, too. There's nothing for him to see, and our dogs rarely bark anymore (not to mention they spend over half their time in the house these days) so I can't imagine what he gets out of it. I've gotten close, leaned over the fence, and flipped off the camera a couple of times but now I'm trying to think of something funny to put right there his view. A sign of some kind, maybe? I would LOVE any suggestions you all might have!

So that's been my week so far. Today I'm planting a few tomato seedlings around the back porch (I'm sure Crazy Neighbor will be watching from inside his house) and then going to lunch with a friend. Spring break is going by a super light speed, but once we go back to school we only have a little over a month and then summer vacation will be here! Then I can spend three months thinking of ways to get revenge on the nutty neighbor! Hahaha.