Every birthday is a good birthday

Yesterday was my wonderful husband's birthday. I feel so bad that it fell on the day we woke up to a new president that we both despise. But as Gregg pointed out, at least he was here to see it. Less than 5% of people with the kind and stage of cancer he had are alive five years later. His five year check up is next month. I don't care what happens in Washington as long as he's here and healthy.

I love that man to pieces... 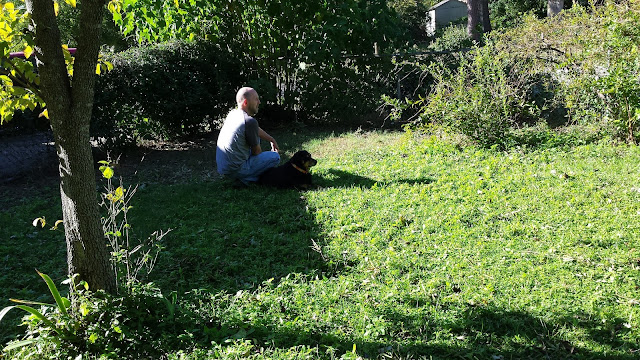 ....and so does Ginger. Those two are the best of friends. Of course he loves George too, but Ginger is special. She was by his side every minute of his recovery (and chemotherapy) and they were tightly bonded long before George came along. They adore each other!

Gregg liked the business cards I had made for him. I also bought him a new planner book for 2017. Being self employed requires good notes to keep everything straight, so every year I buy him a nice new leather bound planner.

He had to work yesterday until late (he opted not to take the day off) so we had his birthday meal a couple of days ago. I grilled the most wonderful ribeye steaks for us! They were expensive, but delicious. I had intended to make him a homemade cake yesterday (pineapple upside down) but after a terrible sleepless night, and then waking up to the news about Trump, I found I didn't have the heart to do much of anything. I ended up going to a bakery and buying a birthday cake instead. 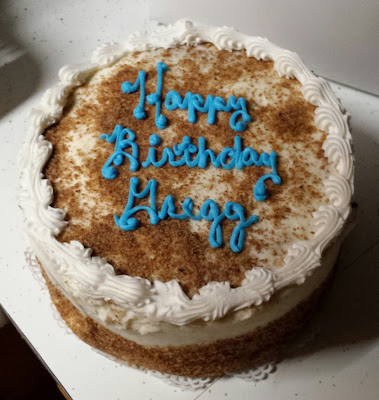 No matter what the next 4 years hold, I'll be alright as long as Gregg's by my side. Every birthday is a good birthday!
Posted by Jennifer at 12:01 PM