Change is in the air

Summer seems to be on it's way out. The signs of fall are undeniable now. It's not just the cooler weather (although that's my favorite part) but also the rapidly shortening days and the difference in the angle of light, mornings and afternoons. The leaves on the trees, while still green, have started to turn a more golden shade of green. There are red berries on the dogwood tree. The very air seems different.

Sunday night was delightfully cool after the awful heat of the summer. I actually slept with two bedroom windows open, and it got down to 69 degrees with a good strong breeze. I put freshly laundered sheets on the bed, took a shower, and then settled down under the covers with lots of fresh cool air circulating in the room. Heavenly. I woke up a couple of times during the night, still feeling all nice and comfortable, and was reminded both times of hurricane weather. The gusty winds stirring the trees outside and the fresh cool air felt just like when a hurricane is approaching.

Speaking of which, there's the storm Dorian down in the Atlantic right now. The latest forecast predicts that it may strengthen to a level 3 hurricane and approach Florida (most likely) or else maybe Georgia or even South Carolina. It doesn't seem like a big deal yet, although my husband thinks I should go ahead and stock up on supplies early. The stores will be overrun in another day or two if Dorian continues to head this way. There won't be a loaf of bread or gallon of milk left anywhere! Ha! People make jokes about "milk sandwiches" around here for a reason. Those two things sell best in the grocery store right before any kind of weather event and I once saw two middle aged women get in a screaming match over the last loaf of bread when it was supposed to snow.

Moving on...…...since we had cooler weather last weekend, I cooked a nice pot roast in the crock pot and made mashed potatoes for the first time in months. It wasn't really pot roast cool outside, of course, just cool compared to the rest of the summer. I was finally able to cook a meal like this without worrying about breaking a sweat while eating it: 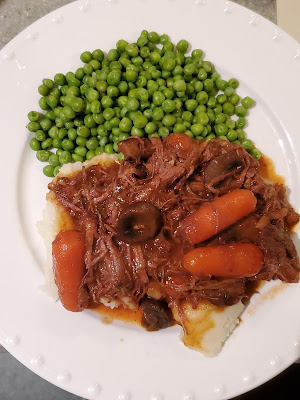 Moving into a new season is always exciting in the kitchen. As much as I love sweet corn, fresh tomatoes, peaches, new potatoes, grilled chicken, and summer salads, I'm longing for soup, stews, chili, and beans. Apple pies and pumpkin bread.

And oh, how I love sitting on my screened back porch these days! Now that it isn't quite so hot in the late afternoon we've been sitting out there every day after work. There's a ceiling fan, so even on warmer days it's pleasant, and the birds are becoming more active at the feeders. We're seeing three hummingbirds right now, but I know they'll be leaving soon. It's a fact that hummingbirds will travel the thousands of miles from South America and back and often will return, year after year, to the exact same feeders. Maybe these three will be back in March. I hope so! As to the seed eaters, their feeders have been invaded by a giant flock of Cowbirds. They're greedy and loud and pushy and I wish they'd go away! And some of the Cardinals have a second brood of fledglings which are pretty cute to watch. I usually have a glass or two of wine while we talk and watch the sun go down.

The dogs like to hang out on the porch with us in the afternoons. George watches the feeders with us, but Ginger naps a lot these days. It's hard for me to admit that she's getting old. But she's definitely slowing down a little and is maybe a little hard of hearing, too. But she's sweeter and smarter than ever and a truly great dog. We're trying hard to notice and appreciate every day with her right now, while she's still healthy and engaged and sassy. Who knows how many more good autumns a twelve year old dog will have? It makes me cry to even type those words. We love her so much. But we're conscious of the passing of time and the need to make the most of the time we still have with her. And George is getting to be a better dog by the day. He's improved so much since we moved here; now he lives inside and never has accidents, or chews anything up, or does anything bad, really. Quite a change from when we first adopted him from the shelter as a wild, undisciplined, mistreated youngster! He's really growing up to be a good dog, too.

I find I'm  really looking forward to my last new season in this house. We bought it and moved in last November, so autumn is the only season left that we haven't seen in our new home. I'm trying to notice and make the most of every single day of it. We're finding that we really like it here.