I'm down to my last four days of summer vacation. When my husband was leaving for work this morning he said, "Better make 'em count!" and he's right. I'll be craving some time off in a month or two once we're back into the full swing of things.

Working the first three days of this week during registration was super easy--not like my regular job at all. Sitting in the gym with a book, selling a t-shirt or two here and there, was actually pretty fun. And I ended up selling over $2000 worth of shirts so it definitely wasn't a waste of time! I got to meet a couple of new teachers and the two new additional guidance counselors joining us. I spent an hour catching up with the band director and hearing about his summer wedding and honeymoon trip to Holland. The science teacher/4H leader/beekeeper that I buy eggs and honey from gave me some advice on my plans for landscaping our small property (I want to make it pollinator friendly) and that was an interesting discussion. Here's a new photo of the zinnias her students planted in front of the school last spring, still going strong in August: 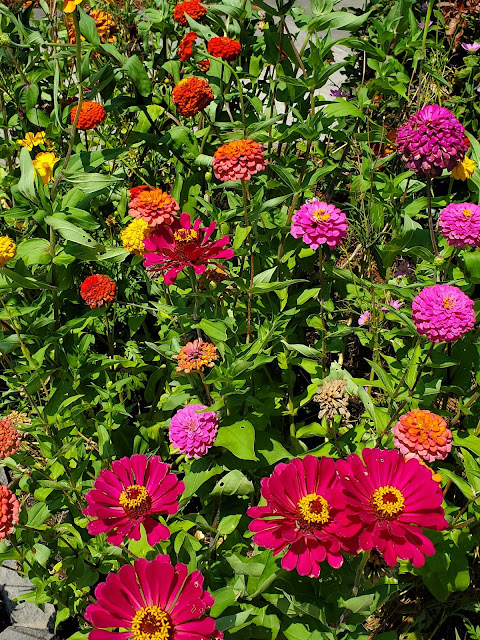 I must plant some of these lovelies here at home next year. They're bright, cheerful, and seem to require very little in the way of care. Plus, the bees and butterflies love them!

On a less cheerful note, the office assistant who spoke Spanish has found a new job and will not be coming back this year. That puts me back in the hot seat when dealing with our many, many Hispanic parents in the front office. I've neglected working on my Spanish this summer and need to spend the next week before the students return brushing up on it as much as possible.

Yesterday afternoon when I got home it seemed like our air conditioner wasn't working very well (again). It was 80 degrees in the house (82 in a couple of rooms that are always warmer) even though the thermostat was set on 76. Folks, I'm embarrassed to admit this, but I nearly had a panic attack over it. I'm not sure if I blogged about the last night of the last time our a/c went out, but it was...dramatic. It was during a sweltering heat wave, the temperature in the house that night was 87 degrees, there was no breeze to catch in the open windows, and the humidity was so high the air felt like thick soup. We had brought in our portable a/c and had it running in the den to try to get some relief, but it wasn't helping much at all. Sleep was impossible. And then about 1:30am I discovered the portable unit was leaking water all over the rug, which led to a mad dash to move furniture, take up the rug and move it to the porch, mop up the water, and resolve the leakage issue so we could continue using the only source of cooler air we had. "Miserable" doesn't even begin to describe it. I suppose I'm a little traumatized by it all. Thank goodness that last night the a/c cooled down to where it should be. What a relief! I suppose because it got so hot outside yesterday it just had trouble keeping up in the late afternoon. I'll be glad when summer is over, honestly. I hate being sweaty all the time. I hate worrying about the a/c. Next summer, we need to just replace the damn thing and be done with it.

Well, off to find a way to "make today count". :) I tried to sleep in, but Marco had other plans. After only three days of me working again he decided getting up at 6:30am is now our "thing". The dogs have already gotten up, eaten breakfast, and are now starting their midmorning naps. What a life, huh?