It's Sunday night again. Today was pretty standard: household chores, laundry, shopping. I tried to do a little extra this weekend because it's almost a holiday! My upcoming work week is only two days long and I want to go into it with a (mostly) clean house.

I bought the smallest whole turkey I could find at Food Lion. It's just over 16 pounds, which is a lot for two people, but the dogs will get their share. Plus, I can make turkey pot pie and turkey noodle soup with leftovers. Gregg's favorite way to eat it is in sandwiches. I prefer it in slices, served over cornbread dressing with a generous pool of gravy on top and a dollop of homemade cranberry sauce on the side. I'm planning to attempt cornbread dressing the way I remember my grandma making it. If it turns out well I'll share the recipe here.

(And yes, where I come from we call it "dressing" and not "stuffing". We bake it in a pan rather than stuffing it in the bird. It's my favorite Thanksgiving recipe).

I made a list of everything I'll be serving at the Christmas book club party and, in an effort to be frugal, started shopping the Thanksgiving sales for non perishable food items. So now I have a jump start on that, too. I've been busy this weekend.

Speaking of being busy, I always think about Ms. Moon cleaning her house and it smelling like "Fabuloso and vinegar" when she's done. I've wondered what that smells like, and then yesterday at the grocery store I found this: 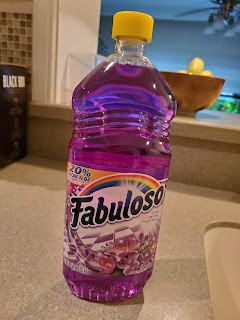 Yay! I was looking for something to mop the kitchen with so I bought it. So now MY house smells of Fabuloso (without the vinegar)!  :)  I didn't realize until I mixed it with water that it's lavender scented. I don't care much for the scent of lavender and I doubt that's the kind Mary uses. Oh well. It smells okay.

I'm off to start our dinner (pork chops) and dessert (apple crisp). Have a good evening or morning, my friends!