This is life around here at the moment. 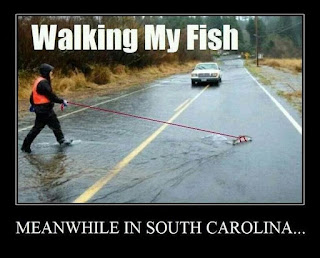 According to our local weather guy, Ed Piotrowski, out of 44 days in this year so far, our area has had at least some rain on 29 of them. It's pouring today and the forecast doesn't call for any dry weather until next Wednesday or Thursday! Ed says that we're above average in actual rainfall but nowhere near records, so for the moment at least we're not having any substantial flooding problems. Everyone is longing to see some sunshine, though. A couple hours' drive to the north and you'd run into a lot of snow and ice. I suppose you could say that we're lucky in just having cold rain to contend with, but it's disappointing to not even get a little bit of snow with all this precipitation. At least snow is a pretty novelty in these parts, whereas rain is just messy and cold and yuck.

I've also noticed that nothing is blooming early this year. Normally if we have lots of sun and plenty of rain in February trees will start to flower prematurely, and then we worry about a hard freeze ruining them. There are buds swelling, but no signs of blooming yet. (That's a good thing). I'm looking forward to my next door neighbor's magnificent tulip magnolia coming into flower, and the redbuds off in the woods turning pink. At this point I'd just be satisfied to see a little sun, though!

Poor George. He hates going out in the rain to pee and poop. For that matter, he hates going out when the ground is wet even if it's stopped raining for a while. He'll hold it and hold it until I get worried and put a leash on him and make him go out. Such a prissy way for a big giant half pit bull to act! Ginger never was that finicky, but then she spent her first three years living the life of a carefree country dog. She loved being outdoors in all kinds of weather. George came straight from the shelter to a suburban neighborhood home and he definitely wants to be an inside dog. 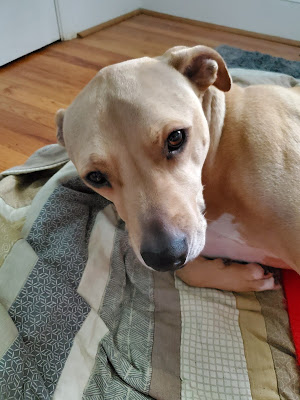 Rain is for suckers.

There's nothing much to blog about today.

Oh, wait, I remember something I wanted to tell you about from last night! It's pretty gross and it made me so mad! On Wednesday I bought a pre-seasoned pork roast that is meant to be made into pulled pork. You put this brand of roast in the crockpot on high heat for 4 hours and then shred it up when it's done. We've had one before and it was yummy. So I bought one on Wednesday to be cooked Friday afternoon. I got off work early yesterday (and it's a long weekend, yay!) so I dashed home and put it on to cook so we could eat at a reasonable time. When the roast slid out of the packaging I noticed it had a kind of  odd, almost slimy texture. I thought that was probably because of all the spices and sauce rubbed into the meat, and again, I was hurrying to get the 4 hour cooking time started so I didn't stop to look closely. Mistake. At 7:30, when it was time to eat, I shredded the meat and noted it had a kind of weird smell. So I sampled a small bite. And it was most definitely off. It tasted kind of sour, and not in a good vinegar-based sauce kind of way. By now alarm bells were ringing in my head, so I dug in the trash..... 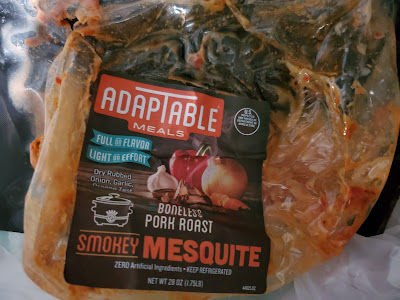 Then I flipped the package over and had a look at the expiration date. 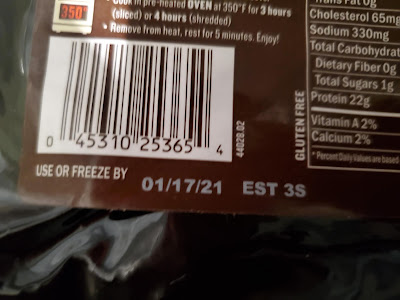 I nearly threw up. I had swallowed a small bite of pork that had been expired for a month.

I'll be going to the Food Lion down the road and finding the manager today to complain. This particular store has been going downhill lately but this is a bit too much. A person could get seriously ill from expired pork! Last week I was in the other Food Lion a couple miles away (the one I shopped at before we moved to this house) and I was stunned at how much cleaner, brighter, and well stocked it was compared to the one I've been using. After I go complain today, I think I resume shopping at the other location even though it's a tiny bit less convenient to get to. And you can bet I'll be checking dates on food a lot more closely from now on.

I didn't realize it was a long weekend until late last week. Monday is President's Day. I wish there was somewhere to go, or something different to do, but there just isn't. It's wet, it's February, and there's still a pandemic. Tomorrow is Valentine's Day, but I don't imagine many people are feeling very romantic this year. It's never a big deal in this house, but I'll be glad for the chance to buy discounted chocolates on Monday. And for the extra day off, of course, even if I spend it at home, sitting inside...again.

What about you, dear reader? What's going on in your world this weekend? I hope you all find small ways to treat yourself to something you enjoy over the next couple of days. Goodness knows we all can use it right now!