It's the first day of spring break and I don't know what to do with myself. Everything has been so odd around here for the past week that it doesn't feel like the beginning of a vacation. Until yesterday there were plans to have a wine drinking/Easter egg dyeing party with Marla and Martina tonight, but I decided to cancel. Gregg is still having pain and feeling pretty miserable, and neither one of us feels like having company. It will be next week after the holiday before he can see a cardiologist and a kidney specialist, so in the meantime they have him on blood thinners and pain pills (to be taken as needed). At this point, we don't know how this will all play out. The doctor said he could work and continue normal activity as long as he feels up to it. Which for my husband means working long days to catch up on his missed aquarium jobs. He refuses to stay at home and rest and it's driving me crazy! I wish the doctor hadn't been so casual about him working, but under the circumstances most people would take it easy on themselves. Although to be fair, Gregg's trying hard to catch up because he has three days off with me scheduled (Sunday, Monday, and Tuesday) and he's determined to have his little mini vacation that we've been planning for a month now. I'm disappointed that he's having it turn out like this though --pain and worry over a health problem.

Another reason I was upset that he went out to work today is that he's driving an hour to service two nursing home aquariums, and terrible storms are going to be rolling in before he can get back home. There's going to be strong winds, flooding rain, and the possibility of hail, tornadoes, and dangerous lightning. I'm worried about him driving in such conditions, but he was stubborn and determined to go. At least he wouldn't take pain meds this morning, fearing being impaired behind the wheel on top of everything else. But he'll be out working with pain in his side.  It's a no-win situation.

That man of mine frustrates the hell out of me sometimes! He's too obstinate to be argued with, though. I've had to learn over the years to just let it go.

So as not to end this post on a sour note, and to show you that it's not all gloom around here, let me share three good things from yesterday with you all:

First up, my smiling Georgie: 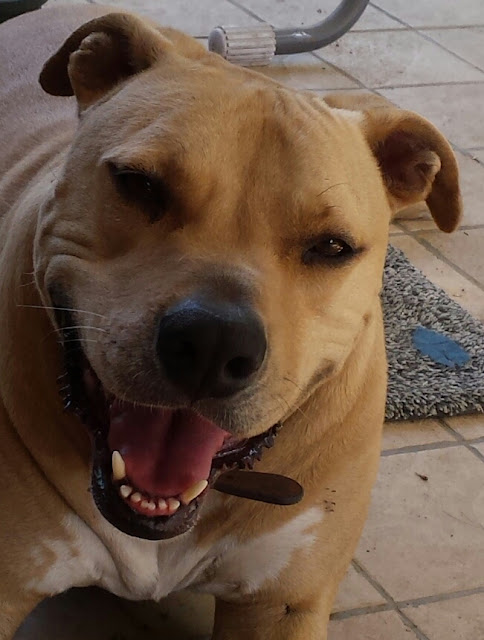 Next, my new shoes. Look closely at the pattern.....it's called "Woof Pack". 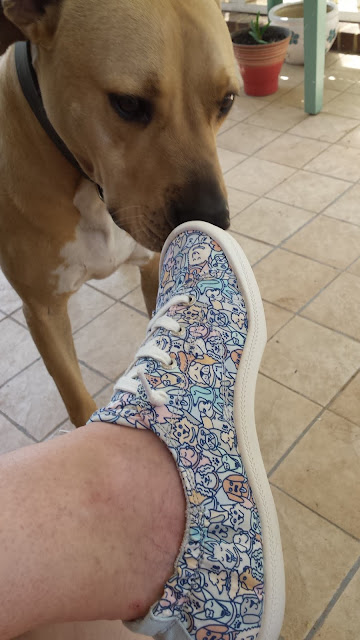 And finally, a gift I got at work yesterday from one of the special needs classes. Next week, while we're on break, Administrative Professionals Day is coming up. Ms. Goodale and her sweet students made this for me.